The one-and-a-half storey house at 1761 Grant was built under a $2,250 building permit  issued to W.H. Creitz at the beginning of January 1910. By May it was on the market, described as having seven rooms “with every up-to-date convenience built in.”  It was “not an ordinary house; come and see it; if you see it, you will want it.”[1] 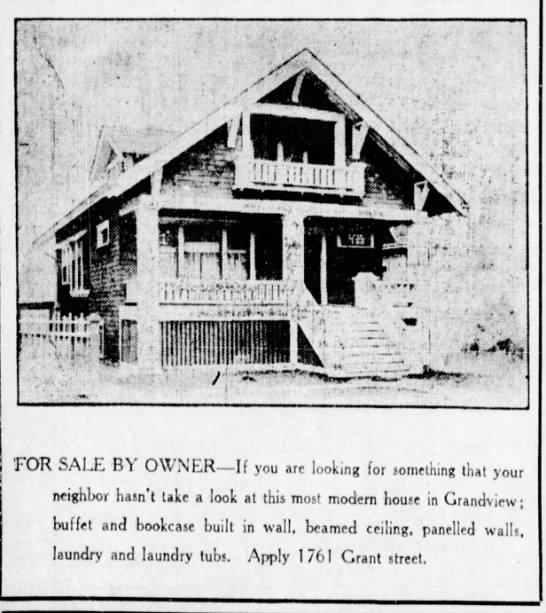 It was still on the market the following January when the owner’s ad pleaded that “it must be sold this week”, and again in March.[2]  However, by the time of the census in July 1911 the house was occupied, mainly by the Jessiman family. Alfred Jessiman was a clerk at the Bank of Vancouver, William was also a clerk, while Norman worked at a hardware store on E. Cordova. They had a housekeeper, Agnes Chino.  But the Jessimans didn’t stay long and by the following year the house was vacant again.[3]

A year or so later, 1761 Grant – along with 1749 which becomes an integral part of the story that follows – was occupied by “Chinese” and “orientals” as the Directories chose to call them.  In 1914, the “oriental” was named as Jim Lem.  According to the 1921 Census, Lem was the owner of the property and lived there with his wife, Gin Shee, three daughters and three sons. He was described as a merchant.[4]

The 1700 block of Grant was a residential street of impeccable character; after all, world-travelling historian, social reformer, and former City Councilor Prof. Edward Odlum had his Queen Anne mansion there, on the corner lot with its lawns flowing down to Commercial Drive.  With the racist tinge that was so prominent in its day, the Province described 1761 and 1749 Grant as having windows that were “nicely curtained, the front yards unusually neat”, so you wouldn’t even know a Chinese family lived there. [5]

For several years, we hear nothing about what the Lem family is up to. In court reports in 1918, Jim Lem is described as “a type of up-to-date Chinese who drives a motor car” and had a position with a bank.  Suddenly, following “information that was obtained,” the house – or more particularly, the garage – of 1761 Grant was raided by Deputy Police Chief Don Leatherdale and three detectives on the evening of 17th October 1917. [6]

When the police arrived, the garage door was wide open, and crates of liquor could clearly be seen.  In the end, 12 barrels of Chinese whiskey, each containing 36 gallons, and 52 cases of Chinese wine worth $4,000 were confiscated under the new Prohibition Act.  Two horse-drawn drays were needed to move the booze to the Police Station. Jim Lem was arrested and charged with keeping liquor in an improper place.[7]

Lem protested that he had purchased the liquor for his own use “for cooking purposes,” and that the police were mis-interpreting the Act.  The police contended that a garage is not a “dwelling place” under the meaning of the Act. Magistrate Shaw agreed with the police, fined Lem $100 plus costs, and confiscated the liquor.

It would take until a hearing in the following February, but Lem was eventually to get his booze back.  He and his father sued the police for the return of their goods and proved that they had laid in the liquor “with characteristic Chinese foresight” to see them through the introduction of Prohibition. Two days before the Act came into force, Lim borrowed $500 from his wife, and $1,700 from his father. He used the money to pay for the liquor from the Western Canada Liquor Company. Lem’s father was known throughout Chinatown, apparently, as a heavy drinker.  Judgement in their favour was issued by Justice MacDonald who declared that Lem was correctly fined under the Act but that the Act did not allow for subsequent confiscation. The police were obliged to return the barrels to 1761 Grant. [8]

Just a year before the liquor bust, a new Chinese resident appears at 1749 Grant. He is J.W. Mang, and given subsequent events, one wonders if this timing is not related.

During the winter and early spring of 1920, the two houses on Grant Street had been linked by the police to a network of cross-border drug smugglers. It was believed that a building on Columbia Avenue was being used as a storehouse for the drugs. An automobile number plate was tied by surveillance to both the Columbia Avenue and Grant Street addresses. The Grant Street premises had been watched by police for some time before, on the morning of 1st May, a raid took place, the houses were searched, and Mang was arrested.[10] 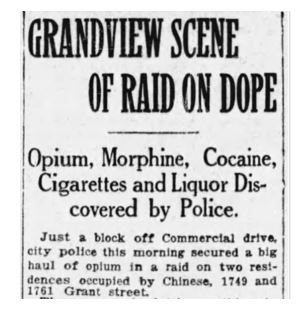 The raid was led by Vancouver Police Inspector Jackson, along with three other Vancouver officers and an Inspector from each of the Inland Revenue and Customs Departments.  One hundred and fifteen tins of No.1 opium, worth about $12,000, was seized along with seven parcels of morphine and cocaine, valued at about $50,000 retail, and several thousand cigarettes; all imported from China.  The opium, the largest quantity seized up to that time, was found in the living room of 1761 Grant after Mang, who had the key, let the police into the house.

“In premises at the rear, the detectives found implements for ‘cooking’ crude opium for smoking purposes, and several photos of white girls were also discovered.”  [11]

The name of the putative owner of 1761 Grant, Jim Lem, never came up in the first reports of the raid. Mang claimed that he was merely looking after the house and that the goods had been left there that morning.  He appeared at Police Court on May 3 and was remanded until the 7th. [12]

Before that hearing, the police struck once more. On May 5th they again raided 1761 Grant Street and tore it apart using hammers and axes in their search for more drugs. After removing flooring and paneling they found another $10,000 worth of cocaine, heroin, and opium. The police believed that the new drug haul had been secreted into the house since the raid just four days earlier, “the owners thinking that it would be hardly possible that the officers would visit the premises so soon after the last raid.” The press was alive with claims that a major continent-wide drug smuggling operation had been broken. [13]

Justice was swift in 1920. On May 10th, less than two weeks after the raid, J.W. Mang was up before Magistrate Shaw.  He presented a highly involved story. He claimed the owner of 1761 was his son-in-law who had been visiting China for the past two years. Before leaving for his visit, he had asked his father-in-law to allow a certain Chinese man to come and go in the house.  On the Saturday morning an unknown oriental delivered packages of grapefruit which he stored in 1761.  Mang claimed to be as surprised as anyone that drugs were found beneath the fruit. Shaw didn’t believe a word of it and sentenced Mang to one year in jail, along with a fine of $500 and costs.  He was fined a further $250 for possession of illegal cigarettes. [14]

Mang was allowed out on $5,000 bail while he appealed the conviction. Mang’s counsel J.A. Russell negotiated a plea on account of Mang’s age, which was 65. It was agreed he would return to China and not return to Vancouver. However, Mang returned to the city in April 1921 and “had no difficulty in passing the immigration authorities.”  He is still listed in the Directories at 1740 Grant until 1923, after which time he drops off the map. [15]

In 1924, the residents of 1749 and 1761 Grant Street are back to being “orientals”. But the reversion to gentility is completed later that decade when all the names associated with the houses are anglo once again.

These raids and their coverage reveal details of the drug trade in 1920 that are otherwise hard to find. Opium was reported to retail in tins costing $110 per; cocaine was sold at $250 per adulterated ounce; while heroin pills were two for a dollar. I would assume that these are prices to a middleman who would break down the product for sale on the street. [16]

[11] The police also noted that both garages and basements were regular storehouses of liquor, piled high with goods.  Province 1920 May 1, p.25;

View all posts by jakking

One thought on “Drugs and Booze: The Rowdy History of 1761 Grant Street”