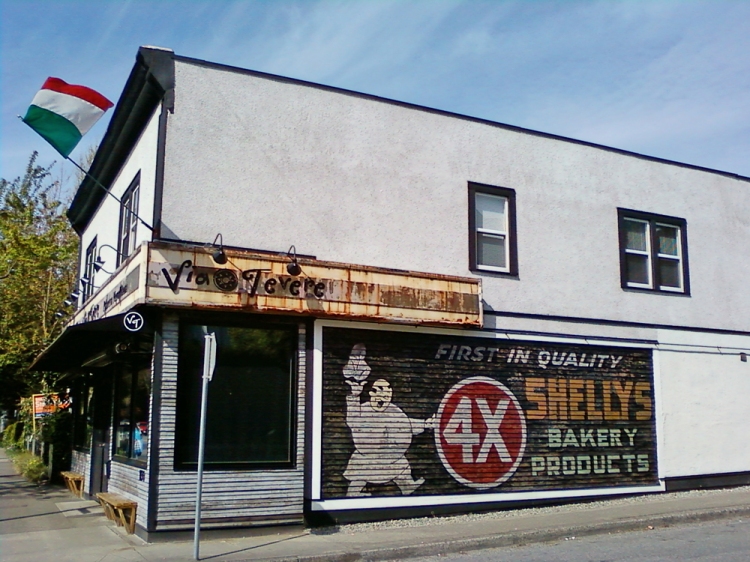 Kudos all round for the completion of the project to restore the unique Shelly’s sign on the side of Via Tevere restaurant at Victoria and William. The owners of the restaurant paid the lion’s share of the costs; our Neighbourhood Small Grant will cover the balance of the materials costs, and we have money in our “celebration” budget (thank you, Hastings North Community Partners Group) for a proper interpretive sign, which will be unveiled at the neighbourhood party planned for June 23rd. It is one of a handful of authentic painted advertisements remaining in Vancouver, and the only one I can think of painted on wooden siding.

Artist Victoria Oginski led the team of 3 in the restoration, lending her technical skills to the stabilization of the painted surface, which was falling to bits two years after it was exposed to the weather during the removal of the 60-year-old stucco on the side of the old Victoria Drive Grocery … 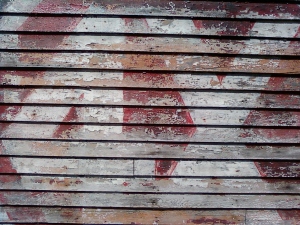 She is also the best, fastest colour-matcher I’ve ever seen. I, Michael Kluckner, worked with Penny Street on the preparation and the painting. We finished up today by applying a coat of high-tech acrylic/epoxy sealer that will protect the surface from UV and any sort of graffiti that might happen along.

William Curtis Shelly had a very significant career, including the founding (with his brother) of the namesake bakery, a huge operation for its day, with hundreds of employees and branches in New Westminster and North Vancouver as well as the head office at the northwest corner of 10th and Ash. He also built the first highway and ski chalet on Grouse Mountain in the 1920s, served terms on the Park Board and was provincial minister of finance from 1928-32. Ironically, he is commemorated in Grandview at the misspelled S-H-E-L-L-E-Y Park at 8th and Woodland! The house in Shaughnessy, 1563 Matthews, where he lived for the final two decades of his life, before dying in 1951, is now the American consulate. I will be giving a brief Powerpoint show on him at the next GHG meeting on May 16th, and we have contacted the Park Board to let them know about the spelling mistake.

How old is the sign? Based on surviving examples of 4X advertisements that date from 1939 and the 1940s, we figure the sign’s design is at least as old as 1935. Whether it was touched up later seems unlikely given the systematic way that the company (by then owned by Canadian Bakeries Ltd., founded by Shelly himself) engaged the Stewart-McIntosh advertising agency in 1939 to update its typography and the “happy baker” image. The sign was probably more or less forgotten during the Second World War years and then covered with stucco when the store was modernized, perhaps about 1950. Doubtful we’ll ever know for sure unless some dated photographs of the store have survived somewhere. The Shelly’s 4X brand disappeared in the 1950s.

There’s another interesting piece to the story of the Victoria Drive Confectionery. It was built in 1922, two years after Scott’s Grocery at Victoria and Georgia (the only surviving operating store in the neighbourhood today). There were a myriad of small groceries in Grandview and elsewhere, affiliated with the big wholesalers – Kelly Douglas, Malkin, H.Y. Louie – the little storefronts dotting Victoria Drive and scattered on side streets like Semlin, Venables and McLean. When Victoria Drive Grocery closed it became an art gallery owned by Bill Gotts that looked like this… 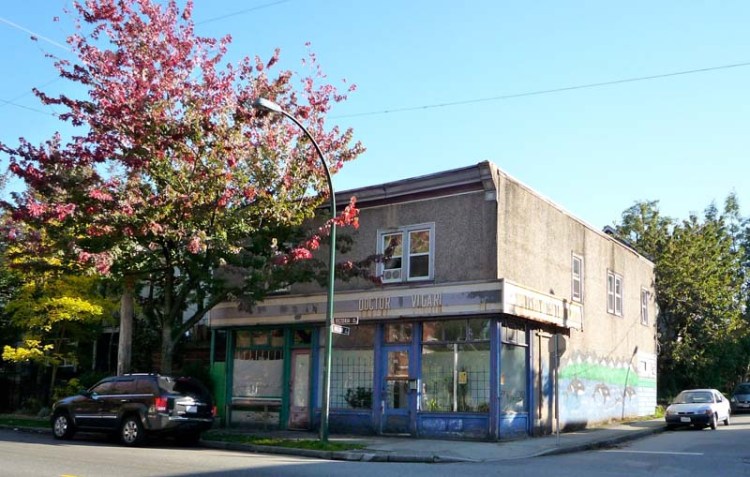 Simon Kendall, the keyboard player for Doug and the Slugs and a neighbour and friend of Gotts, went up on a ladder one day and started making anagrams with the surviving letters from the store’s sign. The upshot was Doctor Vigari, the name that stayed with the gallery when it migrated to The Drive at 2nd and the former grocery building was sold to its new Via Tevere owners. Patrons of the restaurant will see the old sign mounted on a wall inside. 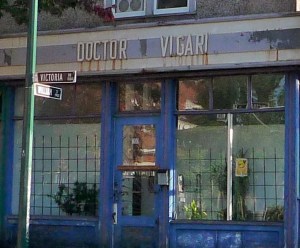