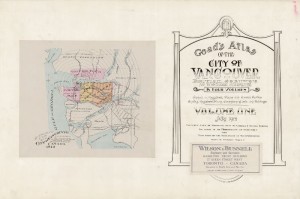 Library and Archives Canada have recently added a copy of a century-old property atlas (used by the fire insurance industry) to its website — the perfect time-waster for a rainy day. Grandview is in Volume 2. Click on the link above and search on the archives site or use Google to search Goad’s + Vancouver + volume 2 and you should get it.

I was interested to see that, in my neighbourhood, there was an isolation hospital on the block just north of Templeton Park (block 9). There’s no evidence of it left at all (although I will check more closely). Templeton School ended up being built in the 1920s on Block 8, which was subdivided into lots but never sold, it seems.

You can see on the map a couple of early street names: Harris became East Georgia, and Union became Adanac on the section between Vernon Drive and Boundary Road, apparently because property owners in East Vancouver complained that Union Street near Main was notorious for its brothels and bootleggers. Adanac, now the east-west bike route, is ‘Canada’ spelled backwards.