A large part of the iconic 1908/c.1921 Robertson Presbyterian Church (and from 1978-2011 a Fijian Hindu temple and cultural centre) will be demolished to make room for a ten-unit housing development on the corner of Napier and Salsbury. The south-facing wing and the west-pointing lean-to will be torn down. The remaining BC Mills Timber & Trading Co. structure, along the north lane, will be transformed into three townhouse units. There will also be six units of row housing along Napier Street and a separate “carriage house” in the northwest corner. Underground parking will be entered from the lane.
The first photo shows the building in about 1921, and the second photo was taken in 2011.
Construction will likely begin soon. 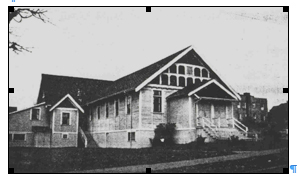