As I am sure most of you already know, the present boundaries of Grandview Woodland are Clark Drive to the west, the inlet to the north, Nanaimo Street on the east and Broadway to the south.  These boundaries were established in the late 1960s.

As local historian Bruce Macdonald has noted, the City has never produced a real map of Vancouver’s neighbourhoods.  The various “neighbourhoods” — including Grandview Woodland — that are used by administrative agencies today were agreed to by the City in 1969 after a great deal of analysis on social service, health and education delivery by United Community Services (UCS, now known as United Way) in a period when Local Area control was all the rage (quite unlike today).

However, it took the UCS a while to get agreement from the local areas themselves.  That’s because the map they produced was based entirely on theoretical calculations, breaking the city down into almost-equal population packages, with virtually no concern for social and historic considerations. For example, the following is the first map they proposed, in December 1966. 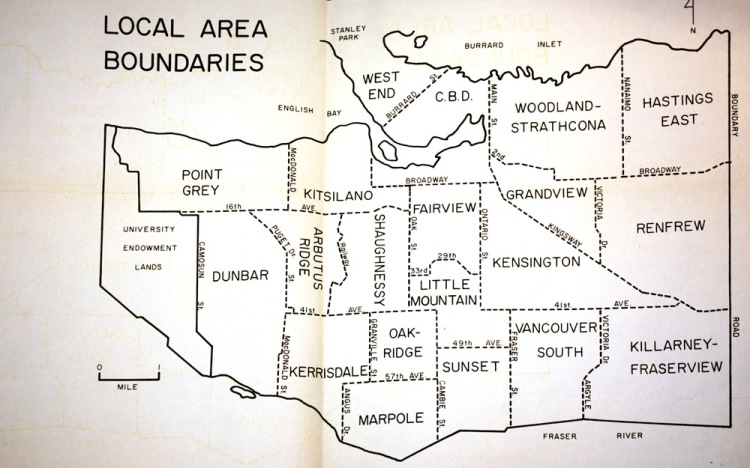 Quite a number of areas were eventually changed, but the proposal for Grandview seems the worst of all.  Virtually none of the “Grandview” in this map is in the Grandview of today, taking over as it does what we know as Mount Pleasant.

The plan to link Strathcona and Grandview had been discussed throughout the 1960s but, luckily, the folks in the Woodland Park Area Resources Council — soon to be renamed the Grandview Woodland Area Council — wouldn’t have it and Grandview was quickly reestablished in its proper position.