In the late spring of 1939, as the political situation in Europe darkened and war with Germany became inevitable, King George VI and Queen Elizabeth toured Canada by train to meet their subjects and bolster the bonds of Empire  From small-town whistle stops on the Prairies to bustling cities coast to coast, eager crowds cheered, sang and lined up for hours, eager for a glimpse of royalty. Grandview was as excited as anywhere, especially when it became known that the royal procession would pass by First & Commercial. 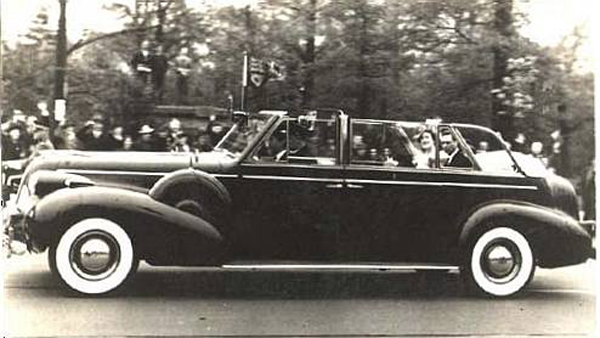 Come the day — May 29th — there were flags and bunting on First Avenue from Woodland to Victoria, and on Commercial from Graveley to Second.  Local people had started arriving before noon, bringing boxes, chairs, stools and benches as spontaneous grandstands.  The Graveley Boys Band stood in front of the Commerce Bank, playing hard.  The streets and sidewalks around the First & Commercial intersection were jammed with spectators as the royal motorcade was spotted climbing the First Avenue hill.  At a few minutes past three in the afternoon, the royal car crossed the streetcar tracks traveling at about fifteen miles per hour.  The car went by so fast that most of the eager crowd caught just a brief look at the King and barely a glimpse of the Queen’s powder blue hat.

And that was that.